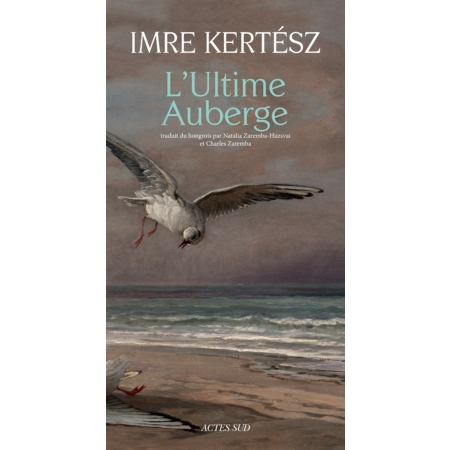 The discursive and analytical sketch of the last book of Kertész (Nobel Prize for literature in 2002), The Ultimate Inn (Actes Sud, 2015) , is at the heart of current debates, particularly on the problematic relationship between Europe and Islam .

The author is the architect tonic of a series of negations, whose presence bursts all dimensions of life: personal, political, metaphysical. Kertész, who has Parkinson’s disease, will die. His fate loudly joined human death, the death of Europe, the death of what remains of the European Jews, the death of God as a principle in a world which is not cosmos, order, calm and pleasure, but luxury without fiat lux , excess,  filthy chaos. The denial of man is viscerally and Kertész, first, denial of his work: « these days is much talked about that in one way or another, received the name of holocaust, but my words are never mentioned, in any context, as if I had not written about as if I did not exist. « (p. 24). This contemptuous indifference will not last, it will lead to another negation, that of becoming a brand, an emblem. The modern writer has a choice between indifference and reification, the lack of consideration or a caricature of himself, the unknown at that address or the show! « It is unthinkable that I become the slave of my own brand. «  (227-228).

For a writer, lead his life as a work is not easy, but the ability to think like language element: « My life is the subordinate clause of a sentence » (278) and to the finding of a inaugural impossibility of modernity, unable to exist: « My lifestyle recalls the efforts of a drooling snail great difficulty ahead on a sandy alley. » (249) Better, the first installment autobiographical Kertész Be s years destiny , showed, among others, that the Holocaust was a fulfillment of history because it gave to see the death of the man: « The main feature of the « be without destiny » is the total absence of link between existence and real life. An existence without, or rather, a being without existence. This is the great novelty of the century. « (11-12) This death will never akin to bereavement, but at a party, a defeat without war and armistice, where we defeated, where one tears because it’s too good to be torn: « the night is illuminated, the world partied. The new millennium … What was written at the dawn of time on the Temple of Apollo? « Know thyself! » Why? For what purpose? « Our hero and protagonist, the man, will disappear soon. Although it can not disappear completely: this will be the conflict of the future, he writes. «  (137)

When the individual history is similar to that of the continent and its values, the pen of Kertész became bitter and sharp as the sword, to obliterate the limit of what we can say, pages or slippage, that is the question. Because the decadence of Europe key is defined by negation of Europe itself: « Europe will soon perish because of his childish and suicidal liberalism. » (173) so that Kertész wrote  »  I noticed that they are not Arab terrorists who are dangerous but ourselves. «  (204). Yet, and this is probably the most controversial point of the book, Kertész did not hesitate to ask the problematic link of European culture to Islam: « Europe is going through again one of its most shameful periods. Deutsche Oper deprogrammed the Idomeneo by Mozart because the action can be an offense to Islam, they say. « (263) We dive at the heart of current losses, untimely cancellations of shows that  » throw the oil on the fire « (sic). Far from the creed we all Charlie , Muslim fundamentalism won. Skid, we said that night thinking, night thinking that we can not condone, when one understands that Kertész appears to equate Muslim with a chimpanzee: « I would say how Muslims invaded Europe, the monopolize, short, destroy; what is the attitude of Europe to face it; I also talk of suicidal liberalism and democracy stupid; democracy and voting rights to chimpanzees. It always ends the same way: civilization reached a stage of maturity exceeded where it is no longer able to defend and do even more wants; where a seemingly incomprehensible way, she loves his own enemies. Moreover, none of this can not be said openly. « (176)

As a response, or rather as an invitation to debate, we will remember these lines Finkielkraut in The Memory vain : « We conclude that humanity ceases to be human, since there is more room for the figure of the enemy in the idea that she is herself and her destiny. This means, conversely , that the idealism is no humanism , that discord, far from being a failure or an archaism of sociality, is our most valuable political and excellence democracy, its superiority over all other forms of human coexistence, lies precisely in the fact of having institutionalized the conflict by listing the principle of its operation. «  The relationship to otherness, the other is both the opposite of a certain Islam (I mean political, I do not speak of Sufism or Islamic philosophy of Avicenna and Averroes) who tolerates nothing but itself, and a modernity that needs equate to integrate, reduce the other to the same , like the political creation of the term « Roma », in the 90 by the European union (creation policy which had been preceded by a terminological creation by the gypsy World Congress 1971).

Similarly, Kertész wrote that the constitution of the State of Israel as a nation-state, while the rest of the world gives up this political scheme, constitutes a priori an uncaused because of anti-Semitism.Put simply, the fate of humanity is based mainly in its ability to address the problem of otherness. the only philosopher to have really taken the measure is called Emmanuel Levinas. Europe to be destroyed by modernity and Islam, the latter being equivocal speech, even contradictory from Kertész, the ultimate hostel of Europe in agony, dragging and dealing his own body, may face a return of dictatorships: « There should be special laws for free citizens, and other laws should apply to Muslims. But it would be a policy of exclusion.However, it is unthinkable that in two or three generations, France, for example, becomes a Muslim country (1). Politicians emerging murky waters of the emotions aroused by fear and hysteria rather want to exploit the situation to consolidate their power instead of seeking real solutions. In other words. It opens the door to new dictatorships, under the pretext of fight against a threat, will be primarily a threat to their own citizens «  brown or Black Death, fashion is changing color, marine colors are in vogue for a future galley log. Obviously, this threat affects, first, the Jewish citizen. It is as if the Western democracies perpetuated the Final Solution by other means, in good conscience, and with the tacit consent of the citizens, when that word says not consent: « I see clearly that the unfinished task of Hitler will be accomplished with the help of the Europeans: they will exterminate the Jews, no quarter, no mercy. It’s like the thread of world history skirted the stations that lead to the great goal of the extermination of the Jews. «  No need to be German in 1940 to test the social conformity of a society that trivializes evil and avoids it into a problem, containing talking monster, mentally ill, insane.

Language elements are perpetuated, always the same. Negation of the negation. Faced with these negations, Kertész presents several passing attempts, the first and most brilliant, which runs through all his work is to take what he called Auschwitz sort of metonymy of the Holocaust, as prism optics of modernity: « the hospital as camp institution in principle only by his organization, certainly, and not in the light of its objectives, intentions. The staff – doctors, nurses, and all others – are dedicated and overworked people all want to do you good, ‘he said. The evil in all this is the irresistible dynamic operation – too many sick and the situation gradually becomes incurable – who heads all the good intentions in one direction only, thereby excluding any radical critique, any possibility of change; the only way to do this is to work. The premises lead to a way of thinking; if we see them in their dynamic corruption and adding an obligation to act, then at the very edge of the reflection the silhouette of which Hoess, introducing Zyklon B., only wanted to « humanize » brutality of the process, accelerate its « functioning ». Which includes this type of reasoning includes the century in which we live, ‘he said.  » (129)

Similarly, if existence is harmed by modernity in general, it also violates itself by old age, disease, suffering the people we love (Magda Kertész’s companion is suffering from cancer ). Self concern is a struggle against all, that is to say also against oneself, against the temptation to give in itself, to give: « As long as I will persist in my madness, I’ll stay sane. I just have to ensure that the child of seventy-five years I am not allowed to put the yoke by the world of « adults » (231). The fight against oneself is not only in the world, it is not only social, but more fundamentally metaphysical and is part of the human condition: « What it means to be Hungarian did not interest me, says -we. No, I say, what interests me is that to be mean. «  (235) The resolution of the problem is the existence of literary – because literature is an approach to life – and individual – because no one can die in my place: « At my age in this world worn, as long as exists and that I’m alive, there is more than the novel that interests me, nothing else. « (22) « I’ve always had a secret life and it was always true. »